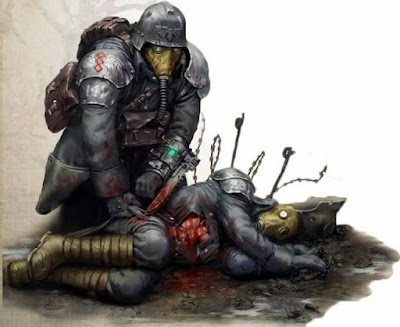 I realize that this may lead to me being labelled an elitist player, but if it leads to more fun games for me and my opponents, then I shall wear that badge proudly.
Posted by Sinister at 11:42 2 comments: 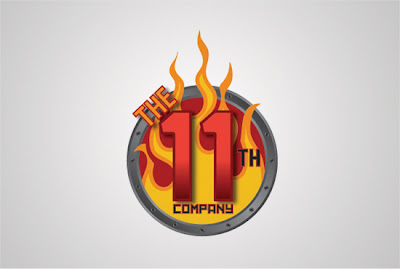 Just a quick shout out once again to the folks at The 11th Company. A few weeks back I received a measuring template which is quite cool.

It has 6", 4" 2" and 1" measuring edges for all common distances. There is also inch markings along the 6" edge in case you need to measure outside of the common ranges. It even has a hole so you can swing it around on your finger while annoyingly waiting while your opponent slow plays you!

So send them some money at http://www.tangtwo.com/11thcompany/, and they will send you one of these cool templates. If you don't send them money, baby seals will die...

PS. Yes this is a shameless plug, but it's my blog, and these guys are cool, so there.
Posted by Sinister at 18:07 1 comment: 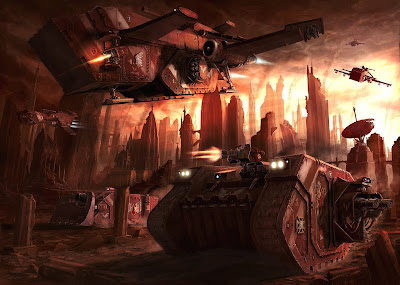 Okay, so my blogging activity has been rather dead for a quite a while now, and now it's time to pick it up again. While I've done a fair bit of putting paint on models, unfortunately nothing has been done to completion. One of my problems has been scurrying to get some sort of force painted to minimum 3 colours so I can actually play with a painted army. This has caused a lot of back and forth due to indecision on my part of what I actually want to paint.

This is now no longer a problem. I have made a purchase from another player who has decided to step away from 40K. Yesterday I received said package, and behold: 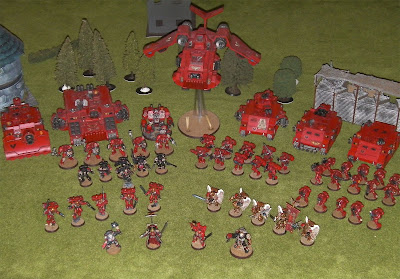 The acquisition of this force will allow me to get games in with a fully painted army, while allowing me to get units fully painted without feeling rushed. I already feel more relaxed about my painting, and have already started mapping out what I will be focusing on next.

This means I should hopefully have more significant content to add to this blog, which should mean more frequent updates. Now I'm not going to get ahead of myself, I'm setting a minimum target of 1 post a month, with an effort being made to do a post every 2 weeks. We'll see how this goes.

Posted by Sinister at 09:46 No comments: 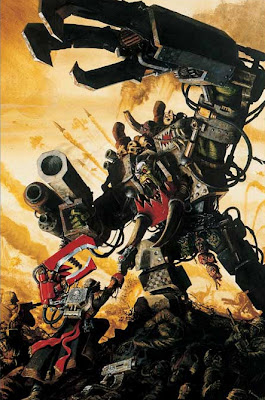 Due too delays (not entirely unexpected), I have fallen short of my rather ambitious target to get a small group of orks painted to a basic state. I am still slowly trudging along and have managed to get some paint onto the models, so I thought I'd put up a small update.

These are the next seven boyz to come off the painting table. The 3 character models that I posted last time are about halfway there, so hopefully I can post them up soon.

The next six boyz with their Nob have been undercoated, and are ready to for some colour.

Side note: You may notice that I've got the models propped on small stands. These are to give me something to grab onto while painting. The observant among you may notice that some are standing on plastic Coca Cola bottle lids. I find these are the perfect size for the 25mm bases. I've also scrounged some lids off milk cartons, which are a perfect size for the 40mm bases. 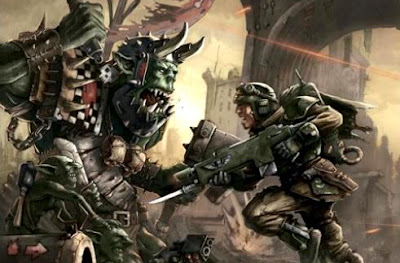 A quick update on the progress of my Ork infestation. After a few delays, I've managed to get the basic colours on 5 of da boyz. I got distracted and started messing with the skin colour, but managed to stop myself after putting a wash on the first one.

While these Boyz are finished to standard of the current goal, they are not complete by any stretch. At a later stage I'll revisit all the models in this project to add shading, highlighting, and clan markings. 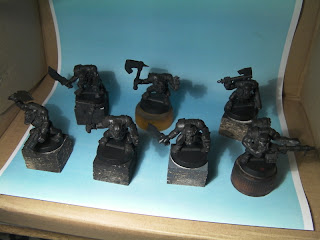 This is the next batch of Boyz, undercoated and ready for some colour. 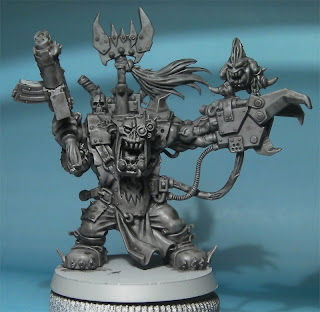 This is my slightly converted Warboss (with his pet squig, Skrat), also ready for some colour. 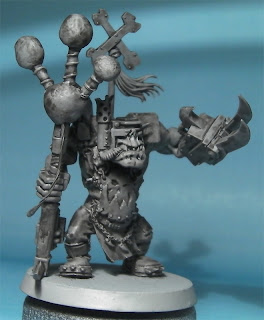 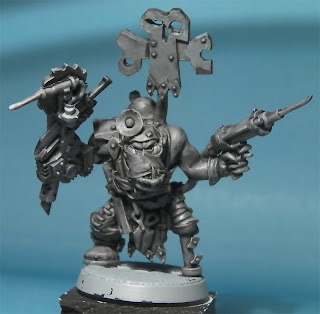 And lastly, my Painboy. No conversions here.

As a side note, I take a slightly different approach when undercoating character models. I prime the models grey, then put a black wash over the entire model. This picks out all the details quite nicely so I can paint the details more carefully. 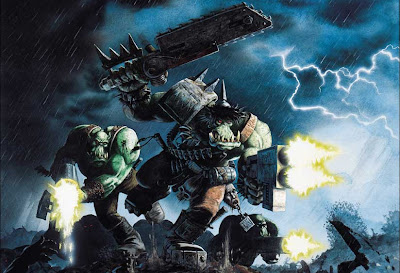 It's been a month or so since I last did any serious work on my models, so last night I sat down to figure out which of my models to tend to next. The immediate goal is to get a small force painted to a minimum standard to play with, while I slowly work on fully painting other models. As mentioned previously, I have a range of armies that need attention, deciding which to attend to next was a bit a bother.

I currently have a bunch of Blood Angels on my painting table, but I want to get these guys fully painted before fielding them. After a bit of back and forth, I finally settled on my Orks (which I have recently reacquired). Even though the model count is higher than any of my Space Marine armies, getting the Orks together and painted (with a basic 3 colour minimum) is likely to be the easiest way to accomplish my goal.

The army will be 750 points of foot Orks, 47 models consisting of Shoota Boyz, Slugga 'Ard Boyz, and Nobz.

My goal is to get this done in the next 2 and a half weeks, which is a bit tight for me, but I'll be trying my best to get it done. I'll hopefully be posting up my progress every few days to try keep myself motivated on this.
Posted by Sinister at 10:34 1 comment:

Email ThisBlogThis!Share to TwitterShare to FacebookShare to Pinterest
Labels: Orks

This is a short plug for The 11th Company podcast, their website can be found at http://www.tangtwo.com/11thcompany/. The podcast is also available via iTunes, and episodes are released weekly. The show has a bunch content squeezed in, with the length of each episode ranging from 2 to 4 hours.

Anybody that doesn't already listen to The 11th Company podcast should really head over to their website and grab it. The podcast is focused on Warhammer 40K and covers a range of topics from army lists and tactics, to terrain and tournaments. The guys are most entertaining to listen to, and I find myself eagerly awaiting the next episode to become available each week.

I recently received some swag in the mail from them, delivered all the way to South Africa. If you want in on some of this, then send them a donation (make sure to donate on their main page, and not on their forum). These guys put together a quality show that really deserves the support.
Posted by Sinister at 12:27 1 comment: